Professor Gi-won Song was recognized for his research paper titled, “Outcome of ABO-incompatible
Adult Living-donor Liver Transplantation (LDLT) for Patients with Hepatocellular Carcinoma (HCC),”
which demonstrated that a treatment before an ABO-incompatible LDLT does not have any impact
on the recurrence afterward, and is highly effective in expanding the living-donor pool and lowering
the mortality rate of HCC patients waiting for transplantation.

Professor Jin Won Lee wrote his research paper on “Evaluation of a Polyurethane Foam Dressing
Impregnated with 3% Povidone-iodine (Betafoam) in a Rat Wound Model.” Through the research,
Lee proved the effectiveness of Betafoam in wound healing* as having equal or superior
performance compared to other various types of silver-containing foam dressings and minimizing
secondary damage to wounds during a dressing change, in an animal model.

The Doosan Yonkang Research Awards for Surgical Medicine were established in 2007 to help
develop surgical medicine and boost the research morale of surgical doctors in Korea.

* Wound healing: A medical terminology describing the process whereby the skin repairs itself after
injury. 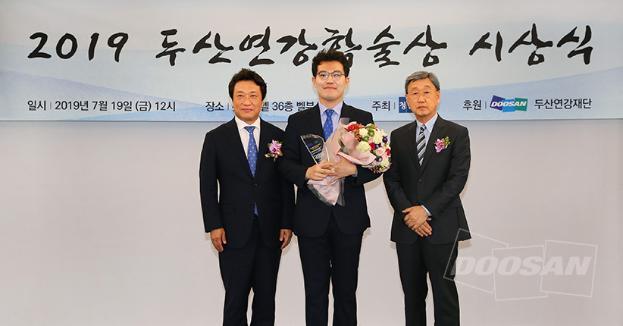